Airports Council International (ACI) World has reported that February was a challenging month for the air transport industry in both passenger and freight volumes.

While international passenger market increased by 4.8% in February – compared to 3.1% for the domestic segment – both figures were close to two percentage points lower than their current 12-month rolling averages (6.5% and 4.9% respectively).

Global freight declined by 5.4% in February, the largest monthly loss since 2013. The global 12-month rolling average stood at 1.8% at the end of February, down more than four percentage points since mid-last year.

“While the passenger market has shown less vulnerability to geopolitical events than the freight market in recent years, it has posted moderating growth rates since November,” ACI World Director General Angela Gittens said. “Trade negotiations between major economies are still underway, leaving the industry in a state of uncertainty. The moderation of passenger growth could be a sign that the effects of this uncertainty, which have had such a significant impact on the freight market, could also have an impact on passenger growth.”

ACI collects and analyzes data from a significant sample of airports that provide regular reports on month-by-month passenger and freight statistics; this forms part of the world’s most comprehensive source for airport data.

Of the three major regional markets, only Europe posted a robust growth rate in February, reaching 5% growth on a year-over-year basis. Although the figure was below its 5.9% 12-month rolling average, it marked an improvement over January’s 4.2% gain. As is typical for the region, the international segment fueled much of this growth, increasing by 5.9% during the month, compared to 2.7% for the domestic market.

Asia-Pacific increased by 2.7% in February. Both market segments performed at comparable levels, with international passengers growing by 3.4% and domestic passengers by 2.7%. The region’s 12-month rolling average stood at 6% by the end of the month.

Smaller markets followed a different trend from the larger markets. Africa (7.1%), Latin America-Caribbean (5.9%) and the Middle East (2.5%) all posted slight increases in their growth rates in February. Africa’s year-over-year results still marked a shift away from its 12-month rolling average of 10%. Latin America-Caribbean and the Middle East’s February results remained closer to their rolling averages, which stood at 5.5% and 2.5% respectively.

International freight was the most significant contributor to the industry’s decline in February, posting a 6.7% loss on a year-over-year basis. Both international and total freight 12-month rolling averages have been inching closer to zero growth and now stand at 1% and 1.8% respectively. Domestic freight volumes posted a loss of 2.7% for the month. The global domestic segment’s 12-month rolling average remains stronger, mostly due to North America’s 3.7% growth rate for 2018.

Africa was the only region with positive freight volume growth in February, with 4.9% growth which contributed to its 12-month rolling average of 10.8%. Asia-Pacific’s freight volumes declined by double-digits in all segments. The international segment fell by 11.6%, while the domestic segment declined 13.1%, resulting in a -12% figure for the month. Unless the trend is reversed next month, the region’s 12-month rolling average will be brought below zero.

Europe and the Middle East fell by 3.1% and 2.9% respectively. Both regions have limited domestic segments so their declines were fuelled almost entirely by the international segment.

North America’s total freight declined by 1.6% in February. The slowdown was driven first and foremost by a drop in international freight which recorded -6% for the month. The domestic segment, which had supported the region for several months while other markets saw declines, also started showing signs of difficulty, reaching 1.1% after growing by 6% in January. The region’s total freight 12-month rolling average remains the highest of the three major markets, at 4%.

Latin America-Caribbean’s results followed the general trend, declining by 0.8% in February. The region’s 12-month rolling average remains fairly high at 6.1%, though it has been steadily losing momentum since benefitting from a particularly strong first quarter in 2018. 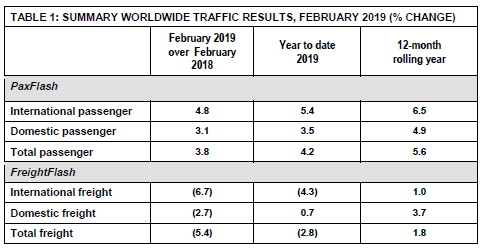 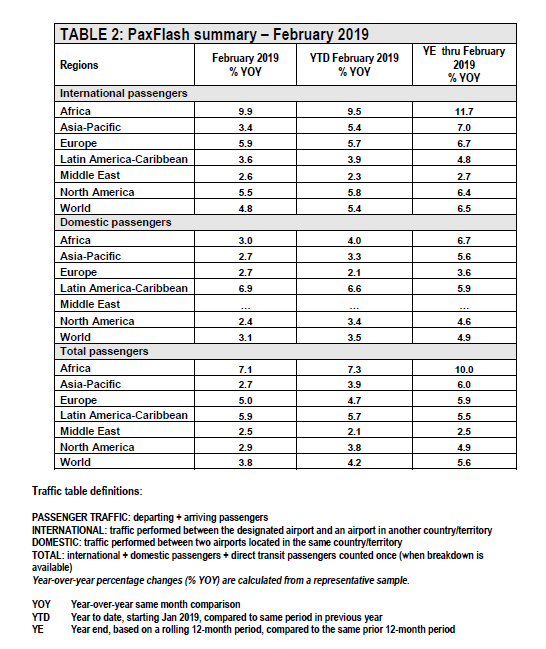 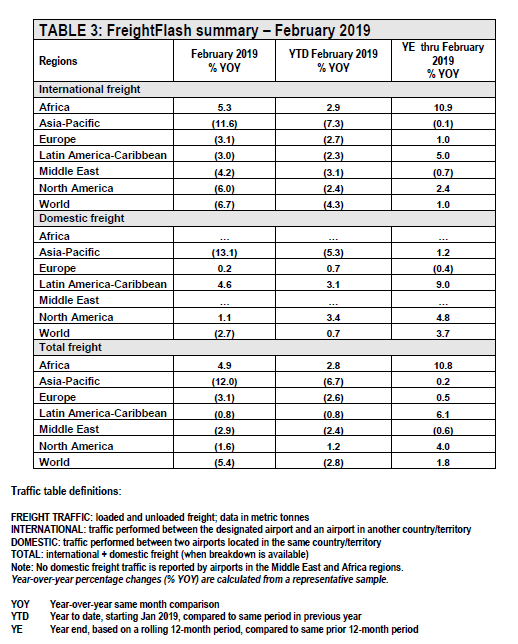 Logos, product and company names mentioned are the property of their respective owners.
© 2020 Travel Industry Wire

If you are a member of Airports Council International you may be interested in learning how to optimize your content on our network.

Travel Industry Wire has a very loyal audience and many companies take advantage of our ability to fine tune information about your organization for them.